A short but comprehensive history of the church was written in 1992 by the then Churchwarden James Grant. It can be read in  full by clicking this link.

The following are extracts taken from his text with illustrations taken recently.

We know from the register that on the resignation of Sir William de Sancta Martina, one Henry de Hamptesfort was registered as vicar on 4th October 1270. Patrons were the Abbot and Convent of Buckfast until the first Act for Dissolution of the Monasteries in 1536. So here on this site, in this church, we have over 700 years of Christian history! Our parish churches provide a very important record of past centuries of our history, as well as being living witnesses to the Christian faith today,

This Church is recorded in the Domesday Book

Many features described in the history notes of this church are still retained. In spite of rebuilding the church is of great interest and good features have been carefully retained. The discovery of the remains of Norman architecture presupposes that a small church existed here from the early part of the 12th century. The edifice was probably removed about the end of the 13th century. The two major periods of Church building were the Norman (12th C) followed by the Perpendicular (1370-1540) and the church dates from these two periods. Major changes were made by the 19th century restorers when it was rebuilt in 1878 and enlarged. 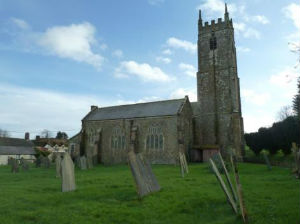 To the right of the Altar, beneath the south facing window, is perhaps one of the oldest and most interesting features of the Church: a Norman piscina with its basin hollowed from a cushioned capital with side mouldings supported by a circular shaft. There are only four examples of this in the diocese. It was discovered embedded in the wall of the Lady Chapel when the church was again re-built in 1878. The piscina was used for the washing of sacred vessels. 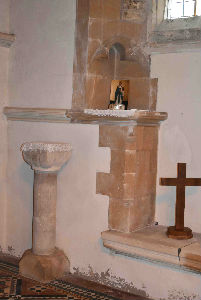 and a Norman font ( of about 1170) which has a 16th century pyramidal cover with carved multiple croquetts. Its base is 19th century work of local Hatherleigh stone. 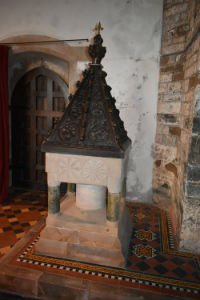 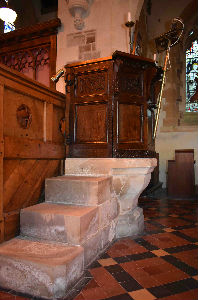 The (Lady Chapel)  Altar Table is old Jacobean; in all probability this was the Altar Table in the Chancel. The altar Screen is of embossed hide. 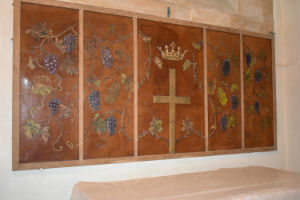 The clock is a very fine one, by William Potts of Leeds, installed in 1923. It has a gravity escapement, which is the best type for turret clocks, and strikes the Quarters and hours. It is installed on a pair of steel girder bearers in the second stage of the tower and the weights hang down in the south west corner, weighting in at 11 cwt. 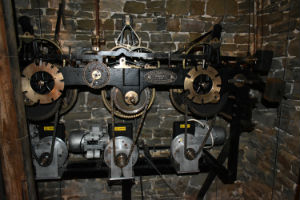