A short but comprehensive history of the church was written in 1992 by the then Churchwarden James Grant. In it he mentions a piece of Mediaeval glass known as the Yeo window.

This is what he said;

The Ancient glass, mentioned in early records as being in the South Aisle facing east, was removed ( in 1878) and is now set out of sight in the Vestry, a great pity. It has been set inside-out, making the “Lion of Beaupre” look very sinister. Also in the shield is the sacred heart and wounds. The rest of the window is Heraldic and connected with a local family namely “Yeo of Heanton Sachville”. 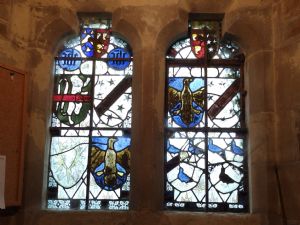 As the window is, at present, in the Vestry and therefore not on show for  visitors except by prior arrangement with our Churchwarden.  We and the  world wide Yeo family would like to raise enough money to bring it out of the Vestry and position it on the North wall in a frame which would be lit from behind. This would both protect it and show it off in all its glory.

If you would like to donate to this worthy cause please follow this link to the Go Fund Me Page set up by the Yeo family for this.

James Grant also mentions the Brasses on the North wall associated with the Rolle and Yeo family and the Yeo window would be relocated to the wall above them.

This is what he said: On the north wall are fine brass portraits of an Elizabethan family, probably coffin brasses: Henry Rolle with ten kneeling sons, and his wife Margaret with eight daughters, the mother saying “My children fear the Lorde”. 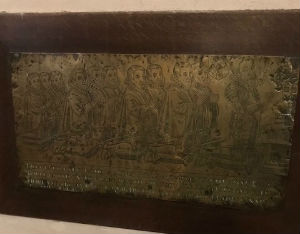 The inscription below the brass reads: Here lyeth the body of Henry Rolle Esquier fourth sonne of George Rolle of Stevenston who maryed Margaret Yeo daughter and sole heire unto Robert Yeo esquier deceased and had issu by her Sonnes and Daughters Nineteen. 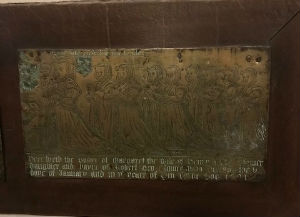 On the right hand plate: Here lyeth the bodye of Margaret the wife of Henry Rolle Esquiere daughter and hayre of Robert Yeo Esquirere who deceased the Vth day of January and in the year of our lord God 1591. The ninth daughter is represented by a skull beside Margaret Yeo’s head, and is therfore assumed to be a stillborn child. Behind the lady are the arms of the Yeo family only.